Watched by Sarah and Ismay at the Watershed

The phrase ‘gig economy’ seems to me a euphemism: isn’t a ‘gig’ something you go to for pleasure and entertainment? You’ll find neither pleasure nor entertainment in Ken Loach’s sombre new film, Sorry We Missed You; rather, a brutally realistic depiction of what the so-called gig economy does to people’s lives.

The film focuses on one family, the Turners, in the north-east of England: Dad Ricky (Kris Hitchen) who lost both job and home in the financial crash of 2008; Mum Abbie (Debbie Honeywood), a carer who looks after elderly, sick and lonely people as best she can in the tight time-frame demanded by her agency, troubled teenage son Seb (Rhys Stone) and 11-year-old Lisa Jane (Katie Proctor).

The film opens with the truly nasty overseer of a delivery company explaining to Ricky that he’s not being hired, he’s ‘onboarding’; that he won’t be an employee, but a self-employed franchise holder. To hire one of the company’s own vans would be ruinously expensive, so Ricky asks Abbie to sell the car which she uses to dash from one to another of her numerous home visits, so as to buy a white van of his own. 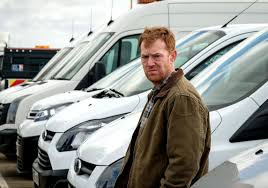 It’s a good investment, as after a year or so Ricky will be earning enough to move the family out of their rented flat and into their own home.
Well, we know that’s not going to happen, but we don’t yet know the devastating cost, to them all, of trying to make it happen.

Ismay: A bleak and cheerless film but so clearly illuminating a real problem for the many people who live on the breadline. It made me stop and think about the big companies like Amazon and how they exploit their staff; but as long as there remains a consumer demand for convenience goods then it looks like this problem is not going to go away …

I seem to remember that I, Daniel Blake offered a few scenes at least of humour and of hope. Sorry We Missed You offers none, despite the excellence of all the actors, despite the deep humanity of the film’s perspective. It is unsparing in the bleakness of its representation of people’s struggle for survival in our age of austerity, aka extreme capitalism, when the most basic of workers’ rights have been stripped away.

2 thoughts on “Sorry We Missed You”