All four of us enjoyed this archetypal story of young lovers overcoming family disapproval to win through and plight their troth at last; we especially enjoyed the non-archetypal setting of high life – literally at times: the final party is held on the conjoined roofs of a row of skyscrapers – amongst the Singapore super rich. No, not super rich: crazy rich!

Alma: I thought it was phenomenal! The romcom side of the film was cardboard, everything else in the film absolutely spectacular. It totally nailed the pan-asian experience and what it is like to be mixed asian/white, and what east asian family dynamics are like. I wasn’t sure about the film beforehand. It had all the potential to be awful, some saccharine romance on a backdrop of rank capitalism (which it was). But also, I get nervous when asians are cast as leads. For a long time east asians just haven’t been taken seriously, been the butt of the joke, the socially awkward, “uncool”, nerdy, playing computer games all the time, always behind a phone/camera, cute, giggly, a bit weird. Kim Jong Un is a hideous dictator, and yet he is hilarious, apparently. Asians receive a unique kind of racism I think – we are definitely not a threat, but also not really anyone to contend with or consider properly.
What’s great is that the film doesn’t actually try to deny any of that – there are some brilliantly bizarre characters in there, some toe-curlingly awkward, some downright jarring, all alongside the Michelle Yeohs and Gemma Chans who are pretty dang powerful. It nails the diversity, and is completely unapologetic about it. Also it makes me miss my tigermum.

Our hero Nick Young is heir to a Singaporean mega-empire and mega-fortune. Our not-rich heroine Rachel Chu, born and brought up in America by a single mum, is a Professor of Economics at NYU, and a specialist in Game Theory. The narrative is delightfully framed by two games, one of chess, one of mahjong. Wow! How she whupped them!

Muffet: I’m glad that nasty old mother got it in the eye at the end.

I found the first half a little bit slow, but after a marvellous sitting-round-the-table-making-dumplings-with-the-powerful-granny scene, it really took off. Lots of laughs, lots of OMG, 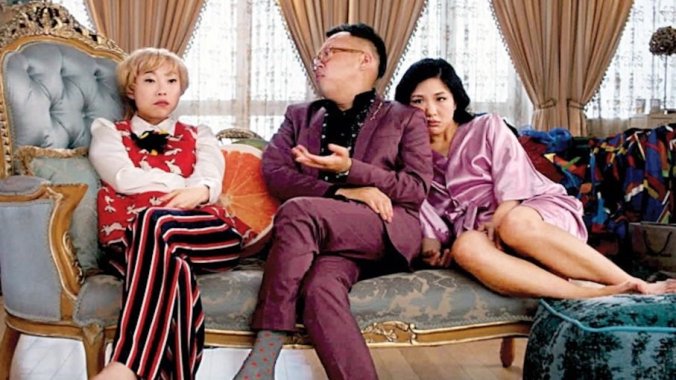 lots of nicely played minor characters, including a kooky friend of Rachel’s (Awkwafina) whose family is merely super rather than crazy rich, also Nick’s plummy-voiced cousin Oliver (Nico Santos), and Nick’s sister Astrid (Gemma Chan), who, when she walks out on her cheating husband, is given the immortal line: ‘Well, as I own fourteen apartment blocks I expect I’ll go and live in one of them.’ Both of the mothers, the kindly one (Tan Kheng Hua) and the scary one (Michelle Yeoh), were excellent.

One thought on “Crazy Rich Asians”